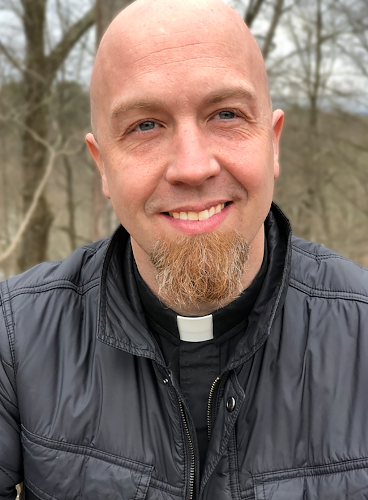 Rev. Tobias Anderson (he, him, his) is pastor and co-conspirator at Redeemer, New Paltz. Born in Woodstock, NY, Tobias lived a number of places, including Austria, Massachussetts, California, Virginia, and Pennsylvania, before jumping at the opportunity to return to the Hudson Valley to embark on ministry work through Redeemer.

Tobias is super grateful for the liberal arts undergraduate education he received at Vassar College, which gave him the freedom to explore a variety of subjects, as well as begin as a theater and music major and then switch to the study of Philosophy of Religion, as well as Eastern Studies, ultimately receiving a B.A. in Religion. During the first few years after college Tobias worked as one of the managers of a chocolate shop (and learned how to hand dip chocolates), fulfilled the dream of a cross-country driving adventure, (including a three months stint as a barista in San Fransisco), completed an intensive training to become a Hatha Yoga instructor, and worked for two years as an Americorps member developing curriculum for middle school youth on the history and culture of the Catskill Mountains of New York State. Called ever more deeply into Christian roots and Church, Tobias then headed off to The Lutheran Seminary at Gettysburg (now a part of United Lutheran Seminary), where he completed his four year Masters of Divinity degree, and was ordained as a pastor in Pearl River, N.Y.

Along the way Tobias founded and directed the music ministry of Faithful Folk for fifteen years, with the mission of “Sharing God’s Love through Music” and helping to raise over $100,000 for a variety of organizations. Tobias has always been a musician (primarily singing), and began composing music in the year 2000 after a near death experience. He has five full-length studio albums to date, and a sixth in the works, all primarily Folk-pop and Folk-gospel, and has also developed a music setting for the Sunday morning liturgy and many other paperless music pieces.

For Tobias, all of life is ministry, be it as partner, dad, pastor, musician, or citizen. He is inspired by his partner and fiancé Stephen and kids Elijah and Ada Gwynne, as well as their dog Cooper, who makes everyone in the family constantly say “Oh, he’s so cute!”

Tobias rejoices to be serving at Redeemer, New Paltz, an outwardly focused church community committed to “Sharing Christ’s Welcome” and message of love and inclusion with the New Paltz area, Hudson Valley, and world.