The Sovereign of Love 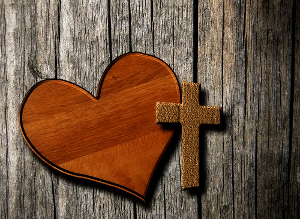 I must admit that it was incredibly difficult to write a sermon this week. I still feel somewhat shell-shocked, as no doubt some or even all of you do, by the events that have transpired. Yet, as I prayed and steeped myself in the scriptures, I found two images placing themselves side by side in my consciousness. One was an image from the gospel itself, and the other was an image from the news on what is being described as one of the darkest days of United States history.

The other image that I found in my mind was a member of the mob of people who broke into the Capital Building this past Wednesday. You may have noticed this man in news photos as well, as he wore a headdress of some kind of animal skin and horns.

The man with animal skin and horns on his head, alongside hundreds of others carrying Confederate flags and even Nazi swastikas, brought their message of white supremacy, division, and hatred into the Capital building in an attempt to overthrow the fairly won presidential election of our nation, the United States of America.

Some say this mob broke into the heart of our nation. But this cannot be so, for the heart of our nation lies not in a building, but in her people. And we the people, despite inheriting an inglorious past that includes the seizure of land that belonged to the native people who were here before us; and the horrendous practices of slavery that morphed into Jim Crow laws that morphed into unjust legal practices disproportionately corralling our siblings of color into the prison system; despite these sinful inheritances, the people of the United States of America are the heart of what this nation can become at its finest.

Yet as Christians we know that in order for us to shine forth at our best and finest, we must muster the courage to be unflinchingly honest with ourselves and each other about what has and is taking place.

What drove that mob was sin. Specifically, the sin and evil that is the racism we all inherit by virtue of the air we breathe in this country and world. Do you find yourself saying, maybe even right this moment, “But Pastor Tobias, I am not a racist!” I have been coming to learn, over this past year – that none of us is immune from this sickness, this sin. If one of my self-described brown siblings can declare with all honesty that she is a racist, then I, too, must acknowledge that I am victim to this sin as well. While we should and must hold those who stormed the capital responsible for their actions and call out their sin, it could be all too easy to point our fingers at “those people” and not also take our own inventory.

Remember Jesus, standing by those who would have stoned the woman to death, asking who among them was without sin, and suggesting that that be the person to cast the first stone. And all the people turned and walked away. No one was without sin.

We all labor under the stain of sin, including racism.

So, while we need to learn about white nationalism, which is the inappropriate combining and conflating of white racist notions with Christianity and national identity, yet we also need to have more courageous conversations amongst ourselves, and join in book groups, and take the opportunity to grow by joining in with the piloting of our Redeemer, New Paltz Survivors of Racism Anonymous group.

Yet let’s ask ourselves, did Christ when he walked this earth and encountered evil, walk on past it, turning a blind eye? Of course not! The demons feared him for they knew what and who he was and he cast them forth, never to return.

So, too, must all of us - who have been baptized into Christ’s death and resurrection - not turn a blind eye. Instead, drawing on Christ’s power, we must name and repudiate evil, casting it forth – from ourselves and from this nation. We must rise like John the Baptist and call all people away from sin, turning once again to God who created all people, black, brown, white - all people - in God’s image in that same dramatic sequence in Genesis during which the earth was brought forth from the void.

“Arise, your light has come!” as the hymn writer proclaims. We are baptized people called, not to bow before the weight of sin or to cower in corners while mobs possessed by evil crowd into the heart of our nation, but to rise up singing and proclaiming justice to the captive and freedom for the sinner. Arise, your light has come! “Show forth the glory of your God, which shines on you today.” (Evangelical Lutheran Worship 314 Arise, Your Light Has Come)

Has the sin of racism pervaded our nation from its very founding, when these lands were wrested from the native peoples who have lived here and slavery brought to its shores? Yes. So, let us rise up and cast forth this sin and sin no more. Let us demand of our politicians and of ourselves that we labor to build just systems in which the kind of racism and violence witnessed on Wednesday is sought out at its roots and pulled up from the putrescent fields in which it was first allowed to grow. And in its place let us plant good grain that will yield a harvest of opportunity and justice for all people, not just the white and those who think they are in the right. For when our lives and nation are stormed by injustice, we can with God’s help build a path to freedom not only for ourselves but for everyone.

In the beginning God created life and light, bringing this earth into being out of a formless void. And God is still creating, still seeking to bring life and light out of the void. I take great hope from all the people, especially young people who are working to try and do this anti-racism work better and more deeply than it has ever been done before. Where evil haunts our lives and world - seeking to hurl the goodness of God’s creation back into the void of before God created-ness, God sends the life and light of Christ’s resurrection work through these kinds of people and even us, seeking to work a new creation.

Apart from God and in our Christian understanding Christ, the void is the beginning and the end. Yet we understand Christ as the Alpha and Omega, beginning and the end. We can be sure that Christ is here and there and everywhere, wading into the midst of the evil and sin afflicting these places and people and us to ensure that something good might come out of the destruction. So, alongside the other two images that juxtaposed themselves for me this week of John the Baptist and the Horned man from the mob breaking in to the Capital building is this more powerful image yet, the most powerful image of all: Christ wading into those waters of the Jordan so that the troubled waters of this world and our lives could be changed.

May this image of Christ and the reality of Christ be our hope, our courage, and our conviction. Amen.